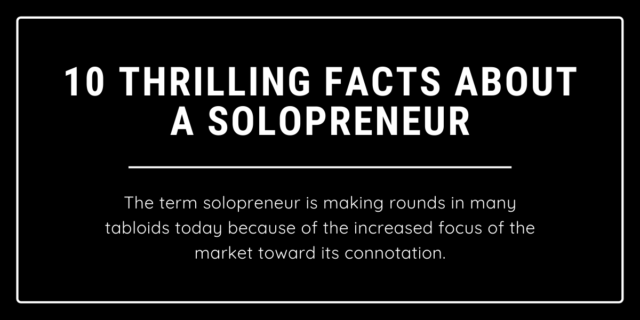 The term solopreneur is making rounds in many tabloids today because of the increased focus of the market toward its connotation.

Who is a Solopreneur?

If you break the term into its two constituent parts, you will immediately realize that the term itself is made up of two contrasting traits. The word “Solo” means alone and the “preneur” has been borrowed from the entrepreneur term.

Also Read: “A Tempting Guide On How To Start A Women’s Empowerment Business In 2022”

Hence, solopreneur means, “an individual who starts a business venture on his own and starts working alone.” Now, many might come to the idea that this is the very same definition that I have stolen from that of an entrepreneur, so what’s the difference between the two?

The Difference Between An Entrepreneur and A Solopreneur

There is a huge difference between an entrepreneur and a solopreneur. An entrepreneur is an individual who lays the foundation of a particular business venture and works by creating teams and employing people under his supervision. For an entrepreneur, the whole thing is concerned with starting a new business in which he needs the assistance of many like-minded people with contrasting traits.

However, a solopreneur is someone who is performing two duties at the same time. He is the one who starts a particular business venture and afterward acts as an employee. Interesting? Pretty much intriguing it is, however, a solopreneur is the one who is the creator and the game changer of his business venture as compared to a typical entrepreneur who needs the aid of a whole team to make a venture successful.

Why Solopreneurs are Becoming so Popular?

One question many of the business chaps ask is the reason behind the booming success of a solopreneur. For those who have done marvelous jobs being entrepreneurs, the fact itself is amusing that someone serves as a creator and employee both at the same time.

For them, this whole thing is nonsense because the traditional entrepreneurs do not consider that an independent individual can work on his own to ensure the success of a business venture.

The fact is otherwise, solopreneurs are contributing to economic growth today alongside the conventional entrepreneurs. A solopreneur is pacing forward to take the economic world in his/her grip again due to the capitalist culture.

When we study the growth of entrepreneurship, we find that many of the entrepreneurs wanted to get out of the chains of corporate culture in which they were bound to work on a fixed salary for long excruciating hours. This became too unbearable for them and at last, they rebelled against this whole system by starting ventures of their interest.

Yet again, when entrepreneurs needed distinguishing talents, they adopted the same policies as those of the earlier corporations. Again, teammates were hired at fixed salaries to work tirelessly. Obviously, this had to result in something catastrophic and this paved the way for the concept of solopreneur to prevail.

This time individuals preferred choosing their freedom by working on their own terms and conditions and in the fields of their interest. This is what makes a solopreneur stronger today as he/she tends to work in the areas which fascinate him/her most.

10 Facts About a Solopreneur

A solopreneur is someone who takes the lead of his/her business but there is more to this journey. Here are some of the thrilling traits which define the functioning of a typical solopreneur.

No Concern Toward Competition

For solopreneurs, competition doesn’t count. Their small-scale businesses are the least affected by the business trends of the market. A typical entrepreneur has to be careful about a number of facts and is highly susceptible to face the competition which decides the destination of many businesses. However, a solopreneur works quietly on the fixed venture without taking any notice of the competitive environment because of the minimal nature of the venture he/she has established.

You must have heard that when it comes to the routine of an entrepreneur, there are no fixed criteria because of the difference of the challenges. Sometimes, an entrepreneur has to miss sleep for many nights. He has to work for continuous hours just to be in the game because without working endlessly for hours, he cannot succeed.

However, this is totally different for a solopreneur. A solopreneur works for fixed or limited hours as per the requirement of the business every day. He/she even gets paid for that fixed hour duration in the ideal cases. There is no obligation for tireless effort because of the nature of the venture.

However, for a solopreneur, no such condition exists. The nature of the business is very small, so the scope for innovation becomes limited. Mostly, solopreneurs are needed to accomplish the tasks which are already existing in the main market. The only difference is that every solopreneur adds his/her own kind of charm to the already existing task.

Compared to the fixed goal of an entrepreneur, a solopreneur has a fixed target. This fixed target aims at earning a fixed amount of income on a daily, weekly, or monthly basis. This helps the solopreneur to estimate the daily based progress.

Once the set target is achieved, no more efforts are required from his/her side and the end goal is achieved. This is however different for a conventional entrepreneur who has set goals at the end of each task and has to continue with the journey even after all the minor goals are achieved. Once the minor goals are done, an entrepreneur moves to the end goal which is gruesome and complex.

No Need for Business Expansion

Business expansion is an essential event of traditional entrepreneurship. More or less every entrepreneur works to expand the business venture because a single venture is not enough to speak of the skill of the curator. However, a solopreneur shows no interest in business expansion. The major factor behind this is the nature of the venture upon which he/she works. As nature is not considered significant, once the targets of the solopreneur are achieved, the idea of expansion diminishes, and the solopreneur fixes another monetary target for the next step.

Lack of a Well-Defined Workspace

The workspace of an entrepreneur reflects the level of work he has done so far. It also tells about the nature of the venture set forth by him. A number of things get revealed by looking at the offices of entrepreneurs. But what if an entrepreneur works independently and has no office of his/her own? What would you deduce about him/her?

Maybe you won’t be able to interpret the nature of such an entrepreneur’s business. However, he/she might be owning a specific kind of business that doesn’t require much of a workspace. Yes, solopreneurs work in the same environments where they don’t have the finest workspaces because many of the solopreneurs achieve their target right on their study tables by using their laptops or mobile phones.

Working for the Sake of Interest

Interest is the power that keeps us all in place when we feel down. Our interests make us happy. What if you could earn money with the help of your interests? Seems impossible? But it’s possible because solopreneurs do exactly the same thing.

They are the ones who work on the basis of their interests. Unlike entrepreneurs, they don’t have to come up with unique ideas or powerful strategies but they can simply put all their effort into the cause of their interest and their powerful skills can help them earn their targeted income.

Becoming the Teammate of an Entrepreneur

By now you must have found that the interests of a solopreneur differ from that of an entrepreneur. He is the one who works for the cause of building income on the basis of interests. This is why sometimes you will find a solopreneur changing his/her career pathway.

Even in the same career, they end up getting hired by the entrepreneurs on an hourly or weekly basis to work on some specific project. This way they not only learn the art of working being a part of the team but also learn many new skills to apply in the business world.

Not Prone to Risks

Compared to a typical entrepreneur who is always prone to risks and can never succeed without some initial failures, a solopreneur writes a different story. For a solopreneur, this whole thing works differently because for him the venture is not of the grand level. This also reduces the risk of it being a failure.

Even if due to some random reason, a solopreneur doesn’t become successful in the business world, he/she is quick to change the path and stick to the more profitable one. The plus point of being a solopreneur is that you have a lot of options to consider and you do not have to invest a lot as compared to that of an entrepreneur who has higher stakes due to the grand nature of the venture.

Some of the Business Ideas for Solopreneurs

There are some fantastic ideas for you to begin your journey as a solopreneur which are getting wide acclaim in the business market today.

In the conventional sphere, an entrepreneur has to invest much of the time and capital along with the time which also increases the level of risks. So, being a solopreneur can be a good option for you, if you are careful about spending your bucks wisely but still want to get independent. You can try being a solopreneur first and when things work in your favor, you can think of turning the interests toward entrepreneurship.

An All-Inclusive Powerful Guide Of Effectuation In Entrepreneurship In 2022

8 Hot Entrepreneurship Ideas for Beginners, Learn and Grow with Effective...

10 Surprising Entrepreneurship Facts You Never Knew: A Trace of the...