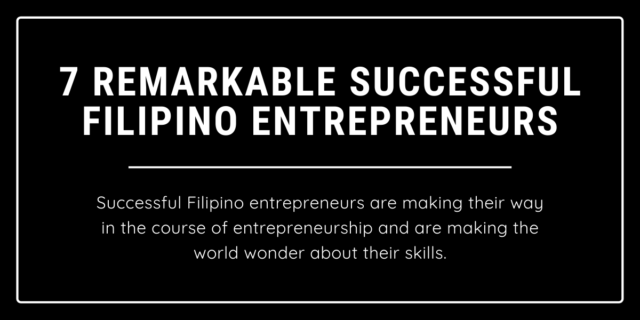 Entrepreneurship in the Philippines

Today we all know that entrepreneurship is growing widely popular in the outside world. People from all across the world are trying their luck in some of the best ventures just to become the rising stars in the sky of the business world. This is why the Asia Pacific has also shifted its outlook from convention towards modernity.

When we talk about the Philippines, it is relatively a new country where the concept of entrepreneurship has started taking roots in its full form in recent years. A survey concluded by the local economic forum puts that about 28% of people are now interested in starting their own business ventures and this is becoming a dominant factor in the prevalence of entrepreneurship in the Philippines.

Compared to other countries of Asia, where labor work is available at cheap rates. Filipinos are exploring their own potential to lay down the foundation of some of the most remarkable business ventures which is not only making them economically stronger but these efforts are uplifting their economy at a fast pace which is of course a very pleasant thing in the economic growth of Asia Pacific.

Filipino entrepreneurs have created a separate entrepreneurship industry through their own flesh and blood. Now we see Filipinos contributing in all the popular areas of the business world. From technology to home accessories, entrepreneurs over there are making their own distinct mark and are proving that you don’t need heavy investments to start a business venture but hard work and a well-planned strategy.

In this article, we are going to inform you about some of my personal favorite Filipino entrepreneurs who have become successful in striking the international minds with the help of their exceptional leadership skills and endless talent for innovation.

Let’s take a look at these bright leaders.

Well, Edgar Sia is considered among some of the pioneers of entrepreneurship who believed in their talent despite the hardships life offered to them. This pearl of Iloilo City became different right from the beginning. As a dropout at the age of 19, Sia led the foundation of his own venture which was a minute one at the beginning involving photo development because at that time it was relatively a new kind of business. However, it wasn’t the only destination of Sia because he had some other aim at that moment.

At the age of 26, Sia finally discovered his ambition and this led to the establishment of Mang Inasal. This was the first time when a barbecue restaurant actually became a widely popular brand in the Philippines. After making the deal of Mang Inasal to Tony Caktiong, Sia gained the status of a billionaire at the age of 42. Today, he is known for his investments in various food chain networks in the Philippines.

I am sure most of you have heard of Henry Sy. He is the perfect epitome of hard work for entrepreneurs today. Sy at the age of 12 left China and started his new life in the Philippines. It was the year 1958 when Sy founded ShoeMart which was a small venture. This beginning from Manila then led to many grand ventures and the most remarkable one was his accession of SM Savings Bank in 1967.

From there Sy never looked back and everything started working in order where Sy started introducing concepts of European business to the Asia world. Another important thing that happened at that time was his interest in the provision of lifestyle products so SM Quiapo appeared before the clientele in the shape of the most modern departmental store in the Philippines.

From this achievement of 1972, the net worth of Sy always remained high. This mastermind of entrepreneurship died in 2019 and now his empire is distributed among his children but the values with which he made his empire successful are considered remarkable to date across the whole world.

John Gokongwei Jr. should rightfully be regarded as the father of entrepreneurship in the Philippines. He himself suffered a lot from the world war and this gave him a lifelong lesson of working tirelessly for the cause. Right after the Second World War, he started his trading company which was a small-scale set up entitled Amasis Trading dealing with local imports at that time.

From this small venture, in the coming years, his rise was on a continuous basis in the business world and by 1961, the Consolidated Food Corporation or CFC was added to the lists of his successful ventures. After its merger, the real effort started which led to the establishment of JG Summit Holdings in the autumn of 1972. This was the beginning of his empire which later on started expanding as his interests shifted into all areas of life.

This Corporation eventually became a conglomerate and today deals with media, lifestyle, automobile, telecommunications, and business aspects all across the Philippines and has expanded globally as well in recent years. This business tycoon died in 2019 but his company is working with the same zeal and spark under the leadership of his children.

Caktiong is known as the master of mergers and acquisitions among his rivals. His distinct business model is taught in many of the universities across the Philippines where he is regarded as an individual with a sharp sense of observation and a fine planner when it comes to business battles.

All thanks to his venture of 1978 which is known as Jollibee’s Food Corporation today. This small venture was initially just a simple ice cream parlor but Caktiong’s sense of business turned it into one of the most leading food brands all across the Philippines. He not only acquired the rights of Mang Inasal as we have discussed earlier in the article but is also the face behind the acquisition of Greenwich Pizza Corporation by defeating other business rivals. Today, his food corporation has stores and parlors spread widely in all of the Philippines and is continuously expanding his business power by entering into other business ventures.

The classic example for that is his interest in the business of property and landings by the year 2012 when he started his property corporation under the name of Honey Holdings Corporation. This smart business corporation then merged with a fellow corporation known by the name of Injap Land Corporation and this eventually became a property company with a new identity of DoubleDragon Corporation which is highly gaining popularity in the Philippines.

Who says women can’t be perfect business planners because we find many examples of women excellently laying the foundations of some of the most successful and historical business ventures in the world. The same is the case of Cresida Tueres. Tueres, a native of Manila with the help of her business management skills introduced something in the Philippines which remains a beloved of most to date.

From owning a local bakery to becoming the owner of a pizza place and then starting her own Pizza Chain in 1971 under the name of Greenwich Pizza Corporation, things came in a flow for her and she accepted all these pearls of success. By the year 1994, due to some economic problems, the chain came under the authority of Caktiong’s corporation yet the original owner is never forgotten till today.

Books are the best friends of many because they provide complete solace and help others find peace and relaxation in their lives. So, this can be a great idea for an entrepreneur to create a place where individuals can find all of their best friends at good rates and can lift the habit of the lost tradition of reading.

Well, this is not just my belief but our very eminent entrepreneur Socorro Ramos is another name who is serving for this cause and has created the National Book Store which has gained the significance of being the largest bookstore in the Philippines.

Today, it is cherished by many of its clients who take pride in the tradition of Ramos and she herself claims that she loves reading and the reason for the creation of this start-up was her inability to read in childhood due to poverty but today she not only allows people to enjoy but is a great philanthropist. This venture made her not only financially strong but also became a reason for moral enlightenment.

Lucio Tan is known for his business interests and wide approach when it comes to investing rightly at places that are always benefiting. Tan started his journey right from the scratch and this is why today LT group has its shares in many business firms, airlines, beverage industry, and food industries.

These are some of the little areas where he has invested shares but his interests in other areas are increasing at a faster pace with the growing years and some of the giants in the business like Asia Brewery and MacroAsia Corporation are a part of his conglomerate industry. Apart from his investments, he is also known for his philanthropy in the business world because he has established many educational institutions far and wide in the Philippines which has earned him the position of an educator.

This tells that entrepreneurship is increasing at a faster pace in the Philippines because of many of the most eminent personalities. Through their journey, one thing becomes prominent. It is not about the investment which is considered a big obstacle by many aspiring entrepreneurs. It is due to continuous efforts and patience with which you nurture your ideas into grand concepts so that things can get easier as you progress further.

Another thing that gets highlighted through their ventures is that the path to success is not easy. You always need to start from scratch in order to reach the top. Once you are there, your planning should be about the future because in entrepreneurship short-term goals and long-term planning are the two things that can help you in becoming successful in the competitive business industry.

The Startling Relationship of Innovation and Entrepreneurship with Top 5 Innovative...