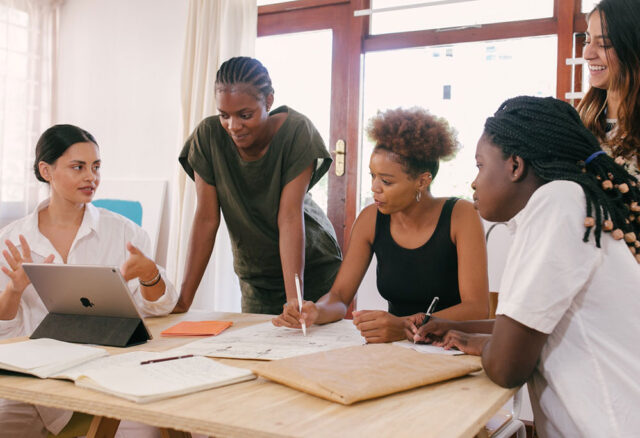 Entrepreneurship is becoming the new ideal of this modern era. From every star to an ordinary individual, you find the likeness towards entrepreneurship unanimous mainly because of the freedom promised by this muse. We all know that the traditional corporate environment is now taking its last breaths and in between that gender roles are challenged in this century.

Contribution Of Feminism In Female Entrepreneurship

If we discuss female entrepreneurship today, the thankful entity for this purpose is for sure feminism. This is because it was the very feminist movement and its 4th wave which made women around the globe aware of their contribution out to the economic world.

So, today when the pages of history write feminism as a movement of resistance, it is also important for the author to mention the prevalence of entrepreneurship due to the awareness of economic rights.

Obviously, entrepreneurship has left deep marks on the minds of women all around the world. Every other woman is identifying her worth and realizing the number of skills hidden inside her. She isn’t merely left to think about the wonders she can do but a woman today proves her credibility by entering into business and competing with the big fish of the pond.

It can’t be denied that the influences are highly positive and more and more women are getting attracted to the concept of entrepreneurship. They are sorting out ways through which they can prove their value within this field and become successful like their male counterparts.

Still, when we move a bit further to the domain of the developing countries, we find a strange reluctance in choosing entrepreneurship as a full-time career. There are certain reasons noticed by various researchers of the social sciences over the past few years.

Many developing countries have the traditional choosing system where the new and broader concepts of the business world aren’t known to the masses. Even men are hardly aware of the true concept of entrepreneurship. So, in this condition, one can’t hope women know anything about this idea properly.

Most of the developing countries are patriarchal in their operation. In these societies, women aren’t allowed to contribute to the business sector because of associating it with men’s caliber. Many women are bound to take care of their families and are made to stay at home because the concept is of women catering to the domestic needs only.

Even if there is a woman who dares to challenge men by entering the business world through the reign of entrepreneurship, she is highly ridiculed and continuously harassed for the choice she makes to an extent that eventually she gives up her career to live freely in society.

Many of the areas where entrepreneurship is viewed as an absent entity m, political or religious hold is very strong. Women are condemned for making a choice in the entrepreneurial world because of the notion of false shame associated with it. This emerges straight from the political and religious conflicts which eventually become a way of life and no one objects to its reliability.

So What’s The Solution?

We all know that entrepreneurship is more or less an ideal career choice for young and other women. It is the choice that leads them to believe in their abilities more efficiently so that they can easily become self-dependent.

In this article, we will give you an insight into all the essential guidelines which are required to promote female entrepreneurship as a norm so that the workload gets balanced and business gets unified for all.

In the past, awareness campaigns have served as the call of the divine where we have witnessed the way through which an issue or a socially needed program made its way into mainstream society.

This time entrepreneurship asks for its due rights. These recent years have become the booster for human rights where several sanctions of the society finally started raising their voices on the prejudices common in the societies.

There is no exception to women who want to do much in business. Raising a voice on their behalf can be a great source of encouragement and an active agent of action through which masses can find the due significance the whole process has.

Many women who are willing to taste the cuisine of business are unable to do so because of the lack of enough resources. This continues and takes control over a large scale of the women population in various societies. This type of attitude needs to be canceled out.

There are women who want to chase their dreams but are unable to do so because they feel that it will take a lot. So, the need of the time is the introduction of a scheme or a system according to which women can easily get whatever they want and start their careers in business easily as compared to the past.

This can be done by introducing certain saving plans especially arranged for the women or loans that are business-related. This will not only bring positivity in tens of work balance but will also add the much-needed empowerment in the society.

Women who are interested and are already doing good in the business field when it comes to the entrepreneurship sphere can extend their vision by the help of attending various entrepreneurial workshops.

These workshops can serve as the hub of production, planning, and development on gradual levels where the best can tell them about the perfection they can add to their business.

Though workshops are becoming common these days and several organizations arrange them overtime for engaging women and enhancing their interest in the business domain, the percentage of women who are interested is the bare minimum.

One of the reasons which I e plotted during the research for this article included their inability to understand the advanced business mechanics. So, it’s better to start it easily and with each step, new concepts are introduced to enhance the horizon of business understanding.

If you are an aspiring women entrepreneur and wondering to explore all of your skills to their full potential, entrepreneurship training centers would be your go-to place. It is because the entrepreneurial training centers tell you to use different advanced level business strategies for the accomplishment of your aim so that you can easily find out the extent of your progress.

These training centers are the markers of progress for you because they allow you to experiment with your creativity as a woman. One way to make entrepreneurship more common is this because there are very few institutions that are fully reserved for women when it comes to business. Hence, your business can escalate at a booming pace only if your approach is constructive and you are willing to learn for the sake of it.

Entrepreneurship is all about IRAs. It sparks up with an idea that can stand all alone and beat other ideas in the market when the long run is the end demand. In my professional career, I have encountered many women who are extremely talented in one way or the other.

The problem with them is their inability to understand their real strength. They are unable to focus on a single venture because they are clueless about the ambition they are brooding.

They don’t often find good ideas to work on so they get stuck in the traditional loop of fashion and make-up. This becomes way too mediocre and leaves no space for the uniqueness to breed. This is the much-needed element when masses talk about the promotion of women entrepreneurship.

So, there should be an interactive conference or sitting where women who have the potential to bring their own magic to the world would be embarked with useful business ideas. Suck kind of business ideas is preferred that can work in the long run and are potentially beneficial for the entrepreneur herself.

When traditional gender roles are challenged by the world, entrepreneurship finds a new route to prevail. Women have a history of subjugation which can be controlled by the help of promoting and creating measures that are easy to follow by masses of women.

Entrepreneurship is very simple yet its tenets are complex. The requirement finds its new dimension where the need to enlighten arises greatly. There is no single effort attached to the entrepreneurial benefit but the collective process is what makes the whole thing more powerful.

Dur e Najaf - July 27, 2021 0
Entrepreneurship has changed its mode of performance with the passage of time. Now, the thing no longer rests on some assumed concepts but there...

7 Captivating Ways To Boost Up Your Financial Wealth in 2021

An Eye Opening Guide About The Home-Based Entrepreneur in 2021