Home Business Some Riveting Details About A Replicative Entrepreneur In (2023) 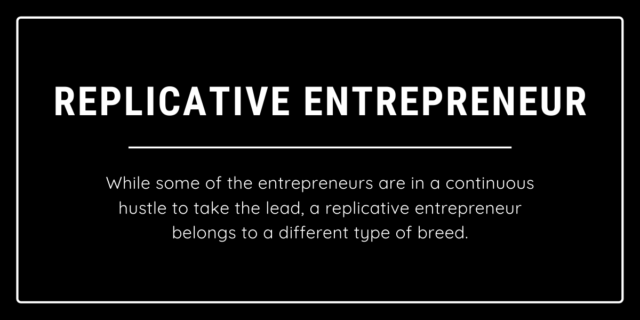 While some entrepreneurs are in a continuous hustle to take the lead, a replicative entrepreneur belongs to a different type of breed.

Also Read: “An Eye-Opening Guide On Fantastic Business Planning Process In Entrepreneurship In 2023”

No doubt entrepreneurs are colored by the creativity of individuals. It is the power that enables an individual to move out of the ordinary lot and give an idea to the competitive world about inner skills. Innovation is an attribute specific to the big names of the entrepreneurial world.

Times and again this has been said and proved. Those entrepreneurs whose focus is upon individual creativity are the ones who have the ball in their court because their creativity speaks of their talent. Their talent is the reason for sorting out major issues, not for a few but the entire community which ultimately gains global significance. So, yes creativity is an essential part of entrepreneurship.

But What About Those Who Do Not Want To Stay Creative?

Well, businesses have a strange rule which gradually becomes a norm here in the continuously altering business world. Confused? Let me clear this out to you guys. When an innovation stays for a much longer time period, it is not only adopted by the masterminds but by the other competitors as well. Hence, the original innovation then becomes normal over here and everyone adopts it blocking their individual creativity.

There are many entrepreneurs who do not stick to the universally accepted innovative principles. They are the ones who are in view of going with the flow, so they adopt every new change which they think would turn out profitable for them in the end. This is because their mind is about catering to their needs and earning profit in return.

So, they often avoid risky situations and many of them become successful even though they don’t work on the innovative principle yet the innovation of someone else is provided to the clientele by them in a much better form than they become the most desired one in the market.

So, Who Are These Champions?

Now brace yourself for the biggest adventure of all time. Yes, it won’t be less than a shock and a pleasant surprise for you that these entrepreneurs who are on the verge of getting doomed, these are the beings who sometimes become more renowned than the original creators of the plan.

Who Is A Replicative Entrepreneur?

A replicative entrepreneur can be classified as the entrepreneur who emerges out of need. Obviously, the population is growing at a faster than ever pace.

This pace makes a single entrepreneur unsuccessful to meet the growing needs of the entire metropolitan community. In those circumstances, the idea often needs to disintegrate itself into multiple sub-ideas. This is how a replicative entrepreneur emerges before the people.

A replicative entrepreneur is one who understands the needs of growing populations in a particular demographic location. For this purpose, his central focus of what should be rather referred to as the “main ambition” is not fame on a global scale but to meet the needs of a vast clientele that is spread over a specific region. He is not goal-oriented but demand-oriented. For him, the provision of immediate demands is the most necessary ambition. This is what strengthens his position in the market.

Mode Of Action Of A Replicative Entrepreneur

When the population grows at a booming pace. It is an obvious fact that the challenge of providing more resources to sustain life will be present. An innovative entrepreneur is the one who provides an answer to the problem faced by the majority of the community but he isn’t the one who understands the growing needs.

It is a generally accepted fact that the human intellect enables an individual to concentrate on a single existing factor. So, you can think of this as an organized division of labor.

When an innovative entrepreneur understands and responds to a problem existing in a community by providing its solution, the replicative entrepreneur is the one who makes sure that the product is supplied within growing populations on an equal basis.

For this, he observes the need for products within a community. He is the one quickly responding to the needs of the community by sorting out the ways through which he can provide his services efficiently to a higher percentage of the overall community.

Now this skill is unanimous to both the innovative and a replicative entrepreneur. As an entrepreneur, you know well that you can never get your entrepreneurial aims until and unless you have the resources enough to get to them.

These resources include capital, perfect political and social scenarios under which the operation is carried out and an efficient team that delivers just the way an entrepreneur wants. Resource assimilation is an important skill of a replicative entrepreneur which he needs to master because it leads him to work just the way he wants.

When there would be enough resources for the completion of a specific mission, things will work well and it will be easier for him to provide to a large number of the population under the right kind of circumstances.

You must have noticed that the business personnel are highly conscious of the changing business situations around them. They keep themselves fully aware of day-to-day changes occurring in the world and their chance of shining amid all that.

This is exactly the skill incorporated into a replicative entrepreneur. He is the one who not only knows the art of understanding a specific situation but is also the one who is capable of responding at the right moment with the correct type of response.

This is what makes him highly desirable among the business race because he isn’t the one who wastes his time in random shenanigans but is the one who knows when to respond and how to respond to a changing economic situation.

Whenever the need for a specific product arises in the business market, it becomes the hot favorite market in which many of the entrepreneurs are trying their luck. So, when an entrepreneur knows exactly how to respond to growing demand in the right way by understanding the depth of the demand, he becomes one fine replicative entrepreneur providing exactly what has been asked from the clientele’s side.

In fact, the distribution mechanism is core to the entire functioning of a replicative entrepreneur. You would be wondering why is it so? Let me clear this out to you. A distribution process involves the movement of products or services from the factory or production center to the mainstream markets and from there to the authorized dealers.

It happens a number of times that when entrepreneurs start their venture, they are not aware of the market situation and put their trust in distributors who no don’t have validity. This creates difficulties for them later on because this way they not only lose the capital but their professional reputation as well.

So, it is more than necessary that an entrepreneur takes care of this part of the replicative journey because once everything fits together perfectly, the journey becomes ordered and more professional than ever.

There are millions of replicative entrepreneurship ventures which are taking control of the world today and catering to the needs of clients on a wider level. Though on an individual basis, every single one of such ventures sits at a distinction from the other one carrying its necessity for the individual’s uniqueness. However, in the end, they all are providing similar kinds of products to the clients with professional refinement.

Some of the big names are:

A brand dealing with soft drinks, juices, and mineral water manufacturing has become a leading name in the world today.

Just like the rival, this venture has seen much of the globally earned fame and is still the hot favorite name when it comes to the all-time best soft drinks manufacturing brands.

Who doesn’t know this lifestyle corporation which is catering to the basic needs of millions of people through its essential items which hold the requisite of being the significant products meant for life sustenance?

Unilever is the best example of replicative entrepreneurship which fights the battle directly with its above-mentioned competition. This brand is also known for its exemplary lifestyle products and has become the apple of many clients’ eyes over the past time.

When a replicative entrepreneur understands his purposefully and provides the products or services to a specific community for more than longer time, the next step is to step forward and walk one step ahead of where provision no longer involves a specific community but then extends to different global communities scattered widely across the globe.

Dur e Najaf - February 20, 2022 0
Idea generation in entrepreneurship is deemed the most difficult task for budding entrepreneurs yet it is the most interesting phenomenon of all. Key Points Idea...

15 Brilliant Affirmations for Entrepreneurs In (2022)