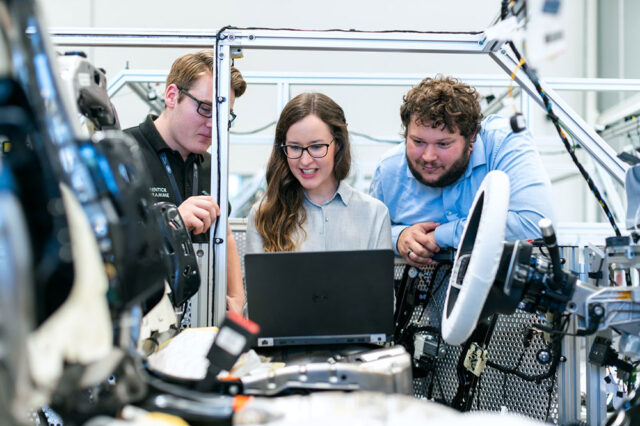 Industry and entrepreneurship serve hand in glove. You cannot forget the role of one in order to move forward in the other because, in the end, both are interrelated.

Many entrepreneurs believe that entrepreneurship isn’t complex at all because all you need to do is to ponder, create and then deliver it in the market.

Also Read: “A Bold and Robust Guide On Apparel Entrepreneurship in 2021”

However, real entrepreneurs know how tough situations can become at times when you have to take care of a number of things. It is not just the whole entrepreneurial process that is hectic and makes things tricky, there are innumerable other things associated and one of them is reviving and operating in coordination with industry.

Why Industry Is Contributive In Entrepreneurship?

Actually, entrepreneurship is the key ingredient that decides the future of a particular industry in a country and ultimately it is the industry that boosts up the economy of a country. I know for those who are getting this concept for the first time, it’s getting a bit tricky.

However, you can understand it by assuming entrepreneurship as the foundation of a particular country’s economy and in this foundation, later on, an entire industry stands firmly strengthening the economy by every single second.

The Depth Of The Concepts

We need to understand these concepts of entrepreneurship and industry a bit deeper than intended. As we all know that entrepreneurship stands for the act of starting up a new venture, however, this new venture is further aided by various resources altogether. All these resources are the agents of change and are provided through various different industries.

If an individual is initiating an apparel entrepreneurship venture. He/she would be using various other industries to meet up the need for resources. There must be industries or businesses fulfilling the need for thread, packaging, and other stuff.

You cannot expect to prosper without getting these basic resources for your business. Hence, by using the raw materials from other industries, you are helping yourself build a new industry i-e the apparel industry which will gradually grow more with time and resources.

Ways Through Which Entrepreneurship Strengthens Industry

Entrepreneurship is regarded as a game-changer in the economy of countries. This is because of the volatile nature of the whole concept. If a venture gets successful, it is not individual success but is a collective marker of success for all.

Once entrepreneurship makes its roots strong in the professional market of a country, we can already interpret that the country’s future in the economic game is already uplifted because of the increased productivity. However, that is not just the only contribution entrepreneurship has in deciding the future of a country but it also gives insight into industrial development which works for the benefit of the overall economy.

Entrepreneurship is very significant in strengthening up the industry of a country through alternating ways. Let’s explore some of them.

Increment In Number Of Active Ventures

Entrepreneurship is not a career, it’s a mindset. You cannot force an individual to become an entrepreneur until and unless there is a particular mindset present for that. When the mentality to create one’s own business based on skills and planning is there, entrepreneurship is inevitable.

You know that once you have the right mentality to become an entrepreneur, you start making up all the efforts to start a particular business venture. This also correlates with the number of ongoing active entrepreneur ventures in the market.

If a number of people are showing their interest in entrepreneurship and are keen to start ventures of their own, you can always expect a rise in the graph of active entrepreneurs.

The rise in graph automatically ascertains the increment in the need for more industries in hope of raw materials. This also signifies the establishment of certain new industries meeting up the requirements of the entrepreneurs.

Entrepreneurship is the direct path towards the development of new industrial hubs. We are saying this with examples from global hubs for entrepreneurship which have given way to the establishment of new hubs.

The best example in recent times is Silicon Valley, Bengaluru, India. Even the greatest financial analysts have described the progress in entrepreneurship over this region in the past few years as highly commendable.

Part of that is because of the mindset of the newbies alongside the ease and training offered by various entrepreneurial organizations to make it more familiar among the young minds.

Now, the other thing which collides in curious minds is the role played by these hubs in the formation of new industries. So, let’s get straight to this point as well. The ventures are the building grounds that form the ideas of new industries.

Examples are the gaming and software developing industries which gained immense popularity among the general public in the past few years because of the entrepreneurial mindset that initially led to the development of the entire business ideology.

Compared to the past, today there is a whole organized system for the nourishment of talent. This is why young talent today has several dimensions which are further designed by then to the level of perfection.

Yes, you got it right. This is the basic idea behind the establishment of a particular industry. You have to be innovative in association with being creative. This creativity is available today on the grassroots level.

Every other individual has a different thought or perspective about a certain issue which brings many ideas on the collective in the market. When manpower is strengthened to this extent, innovation takes up a new shape and various new industries come into existence making the relation between both stronger than ever.

We all know that industries are important because they decide the economy of countries by contributing to the overall exports. These can be either in the way of goods or services. However, the whole export system is largely based on the way industries exist.

Entrepreneurship makes way for new businesses. These new businesses then stand together as entirely distinct industries meeting the needs on a global level.

Many of the large-scale industries today were nothing but entrepreneurship ventures that got very popular among the clientele. So, with the expansion of the venture, exports become more common and this also boosts up the economy.

Heightened Market Influence Of An Industry

Every region has something popular which is the trademark for that particular region. In the same way, industries are the trademarks for regions where entrepreneurship is adopted not as a concept to get popular and rich but to create.

This is why we find the influence of certain industries very dominant today in the whole world. Some of the tech-based industries, fashion, and cosmetic industries are becoming the talk of the global business sphere because of their increasingly fascinating influence.

The typical examples are of Apple, a venture which originated in the U.S initially has now become a global sensation hoisting the flag of technology high. In the same way, Versace, an Italian venture has revolutionized the modern fashion industry and is a reason for the emergence of various other competitors in the business market.

Providing Framework For An Industry

As this has been repeated earlier that entrepreneurship is not only beneficial for individual success but is also useful on a collective level for it gives an overall framework for a grand venture of the future.

It must be remembered that it is the very idea that later on forms a specific venture at first and then forms the basis of an entirely unique industry. So, this means that entrepreneurship is the way through which various new ideas can be cultivated as full-fledged industries in the market.

Another interesting thing is that when several entrepreneurial ventures are aiming to provide a solution for one common issue, then we eventually find all of these issues resting at one fixed answer and that is the establishment of a new industry that is distinctive and innovative as compared to the past.

For example, today the cryptocurrency has developed as a whole new industry which itself is the result of the mindset of few entrepreneurs who aimed at revolutionizing the traditional money industry.

Industry and entrepreneurship are very much dependent on one another. You cannot deny the fact that without the contribution of one, the other can prevail. Entrepreneurship is the agent which fuels industries. On the contrary, industries payback to the entrepreneurs by being the agents of resources.

They are the homes for all the essential needs entrepreneurship demands. This means that progressing without taking the contribution of both is useless in entrepreneurship.

It is very important that aspirant entrepreneurs find the true significance of industries in their journey because the journey is incomplete if it is not adorned by the latest resources which are only available in the form of leading industries.

15 Brilliant Affirmations for Entrepreneurs In (2022)

Top 10 Common Traits Of An Entrepreneur in 2021