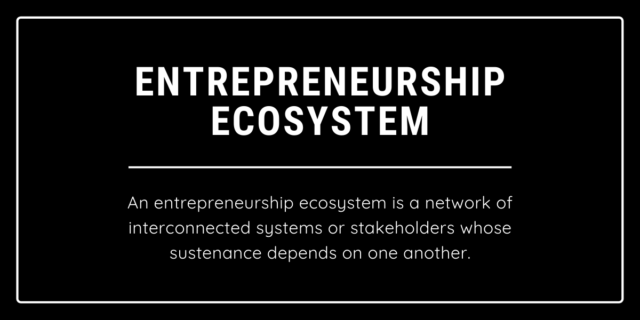 An entrepreneurship ecosystem is a network of interconnected systems or stakeholders whose sustenance depends on one another. Let’s find out more about it.

Entrepreneurship is regarded as a vital constituent of benefit. The best thing about it is that it is not selfish in terms of associated benefits. It benefits all the agents which correspond to its success one way or the other. This makes it synonymous with a natural ecosystem where every living being is dependent on someone else either living or nonliving for the sake of sustenance.

This definition looks ridiculously interesting because systems are codependent on each other which imitates the shape of a cycle. In an entrepreneurship ecosystem, nothing exists outside the system, but everything beneficial is located within the system itself causing collective advantage at the end in the form of a successful venture.

Entrepreneur Ecosystem and the Stakeholders

When you are stepping into the truth of the entrepreneurship ecosystem, you discover that from a financial point of view, the systems which are existing within the ecosystem are considered as the stakeholders for entrepreneurship.

Definition of a Stakeholder

Significance of Interrelated Systems in the Entrepreneurship Ecosystem

You must remember from the junior grade that when you studied the natural ecosystem, you found out that the survival of one is incomplete without the other. It is the mutual effort of all the components which ensure different forms of life. Now that I have reminded you of your school days, allow me to come back in the financial domain once again.

Just the way a natural ecosystem is interdependent on several factors which are incomplete without each other. In the very same order, the entrepreneurship ecosystem exists. Here certain factors are the reason for the existence of an entire entrepreneurship venture without whom the venture could not be completed. However, it is not the only truth but for the survival of those agents, entrepreneurship is equally important. This is why both the stakeholders and the venture have a combined effect on the overall system of sustenance.

An entrepreneurship ecosystem cannot exist without implying the:

The basic thing you need to carry out the entrepreneurship venture is manpower. It is the basic elixir to breathe life into a mere plan. Human efforts are the prime elements that make a venture successful. Now digging deep into the concept itself, we will find some interesting truths about the whole system.

Individuals are needed from the base to the top. It is a human who creates a plan for the business at first and then gathers like-minded people in order to manage the venture successfully. It is through the efforts of individuals that we find grand ventures ruling over the business empire. You can easily say that every entrepreneurial venture is a work of the human mind. So, manpower is the basic element of an entrepreneurship ecosystem.

Now, turning the coin in the opposite direction, humans need entrepreneurship ventures to stand because these ventures are the source of capital that sustains their lives. Whenever a business venture is established, it provides jobs to a lot of people meeting their needs to survive. So, both these factors are dependent on each other and one cannot stand alone on its own without the other.

No entrepreneurial venture is complete until and unless it is financed adequately. For financial needs, it depends on the system of capital and banking services. The loans and sponsors are provided by the banks and other wealth-creating and managing resources so that the entire venture can become successful and up to the demands of the current scenario.

You can never expect to complete an entrepreneurship venture if it’s not funded by several organizations involving wealth to mark its completion in the perfect order. This member of the entrepreneurship ecosystem depends on the ventures because the loans and sponsors granted by them touch the boundaries of their individual existence.

Banks offer loans with an interest rate of their own which keeps them in order. At the same time, the sponsors provide the necessary profit to banks enabling their existence in the perfect fashion.

No entrepreneurial venture can exist on its own without the legal permission coming from the law enforcement agencies and most of all the government itself. When a government says yes to any new entrepreneurial development in the country only then actual efforts to start the project are initiated. The governments have their own reason for doing so.

If they do not permit the establishment of new entrepreneurship ventures, it will become increasingly difficult to meet the needs of the population on its own and provide a large number of jobs. So, when new entrepreneurship projects start, they not only cater to the need for jobs but also earn a huge amount of capital at a global scale, benefitting their government in return.

This part of the entrepreneurship ecosystem depends on entrepreneurship because of the capital power. When these sources are employed, they make capital of their own which is necessary for their survival. So, this interdependence brings benefits to both.

Culture is an essential part of an entrepreneurship venture. This is because it gives the entrepreneurship plan a direction to proceed. Whenever an entrepreneurial venture is in the development phase, it is high considering the culture of its parent country so that when it develops it can be according to the tenets of that specific culture which could help it grow without relying on external sources.

The culture on the other hand remains alive through the venture because when the business venture starts promoting a specific culture, the culture becomes the center of attention for the common local and global lot. This makes the entire venture beneficial for both the systems which hold their respective positions in the entrepreneurship ecosystem.

The political scenario of a country is very much influential toward determining the future of all its entrepreneurial ventures. This is because when there is political unrest in a country, no project of welfare or individual benefit can initiate. Even the projects which are already going on come to a sudden halt and then eventually end.

We have examples of countries like Syria, Palestine, and Nigeria where the technological ventures came to a sudden halt and everything ended swallowing up the chances of any new ventures in the future. However, this thing is equally important that even this political unrest comes from the lack of opportunities which are not there regarding the business ventures to sustain life.

Yes, you read it right. The geographical conditions are also an essential part of the entrepreneurship ecosystem. This is because, if there isn’t desirable land to sary up a venture, things can never start in the first place. However, once the venture stands on firm grounds over a certain area, its significance automatically increases because of being the hub to technology and production.

The best example comes from the U.S where many of the states and cities are hosting grand entrepreneurial ventures especially California which marks the headquarters of grand ventures like Apple and Facebook. So, this has also contributed to highlighting the significance of that very area more than ever.

The entrepreneurship ecosystem makes up the entire structure of the system within which agents of production and consumption interact with one another. So, to gain knowledge of the field, it is necessary to find out all the contributing factors arranged in the patterns of performance.

Dur e Najaf - October 17, 2021 0
The ratio of aspiring business women is increasing day by day who are keen to prove their capabilities through effective planning. Key Facts Aspiring business...

A Little Known Account Of The Dark Side Of Entrepreneurship in...

A thing about Entrepreneurial spirit: Signs you do have that vibe...