Home Business Fascinating Facts About A Fabian Entrepreneur In (2022) 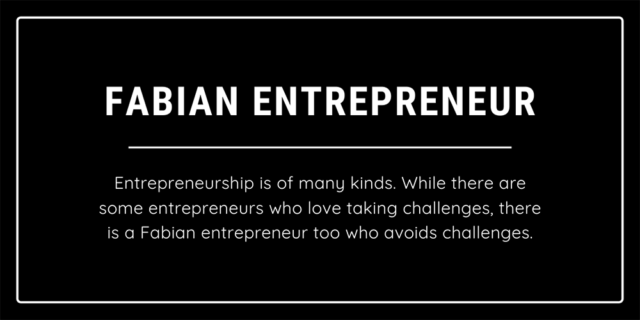 Entrepreneurship in the 21st century has grown to be a fiercely popular concept among the common lot. A number of times, it is repeated that entrepreneurship stands for a concept that favors innovation and supports uniqueness despite the apparent risk of losing everything in hand. Most of the entrepreneurs believe in this principle too. They are the ones who have shown their true potential to the world in unfavorable financial situations. However, there is another lot who doesn’t believe that risks are worthy of taking and avoids innovation at the cost of risks. This lot is of the Fabian entrepreneurs where each and every Fabian entrepreneur has a different theory regarding innovation.

Unlike the traditional risk-taker, a Fabian entrepreneur is the one who has “ a little to no interest in bringing innovation in the already existing business model. He is the one who always prefers to play safe and stay at the same position wherever he is, until and unless there comes a financial crisis and it becomes necessary to take the risk.” Though many of the renowned business experts do not consider him a successful entrepreneur and to many, such an individual isn’t an entrepreneur at all.

However, due to the changing trends, the business market has become smooth and accommodating to all the unconventional categories of businessmen who eventually fall into the entrepreneurial category one way or the other.

Why a Fabian Entrepreneur is Not a Risk-Taker?

A number of people have this query in their minds that what makes a Fabian entrepreneur incapable of taking risks. So, here is one simple answer for that.

A Fabian entrepreneur knows that the business is going smoothly and everything is working at a good pace, so, in his mindset, the idea of running for success in the field is unnecessary when you have the due share of success already there for you.

Though it seems a bit strange yet this mindset is developed by the rigidity in thought patterns. Many of the conventional entrepreneurs who were there from the start can also be regarded as Fabian entrepreneurs.

This is because they belong to the time, where business progressed without scientific and technical innovation. So, once they found that there’s a way to evade risks they settled in that pattern. These are mostly the conventional entrepreneurs who have a fixed idea of business that cannot be altered.

Who is a Fabian Entrepreneur?

Another question that is mostly posed by people is who are the Fabian entrepreneurs usually. This is because depending on the innovative trend of the market, it is hard to believe that there are business personalities who don’t want to step out of their comfort bubble. However, there are such entrepreneurs whose approach to the convention is firmer than you can expect. These are the ones who have not made themselves from the dust. They have owned their family’s business.

Therefore, this makes them ignorant about the actual struggle of a real entrepreneur. The issue is that they don’t have to work hard enough because they have teams under them who have been managing the tasks right from their ancestors’ time and this makes them completely ignorant about the true struggle of a genuine entrepreneur who competes hard solely because of the competition.

Characteristics of a Fabian Entrepreneur

A Fabian entrepreneur is one who is not well aware of the responsibilities which are delegated to him. Therefore,

Lack of Courage to Innovate

A Fabian entrepreneur is always an individual who doesn’t have the courage needed to bring forth innovation. He is always the one who shows little or no interest in making up the policies of the company according to modern norms.

This is why the venture gets doomed or reaches the extent of demise when he agrees to develop his interest in bringing some changes in the traditional norm. The best example for this can be “Nokia ” which was the leader of the phone industry at one time.

However, with the smartphone trend in the market, Nokia didn’t possess enough innovative strategy to bear the growing competition and merged with Microsoft. Even this could not save Nokia from its fall and eventually, it became a tale of the olden days.

This is why innovation is an essential component, though for a Fabian entrepreneur innovation doesn’t count much unless there is a danger to take some actual step to save the falling venture from disaster.

A Fabian entrepreneur doesn’t care about the fast pace of the entrepreneurial world. In many ways, he is unable to get the trends of the market. It mostly arises from his habit of sticking to the conventions of the past.

The past business values are worshipped by him as holy scripture and therefore, the present situation is overlooked by him despite fair warnings. Once the Fabian entrepreneur becomes stiff towards the growing competition in the field, even his team is unable to change their mind.

You would be shocked to learn that even when he quits playing safe and comes out of the comfort bubble, still uniqueness is not a way to compete in the market but a way to survive according to him.

Not a Leader at All

A leader is one who understands the changing trends and has the strategies to deal with them. This works differently for a Fabian entrepreneur. Though he is ahead of a business venture, still the leadership qualities and the essential understanding of the gravity of a situation lacks from him.

To him, his team is the agent of action and he is just a supervisor of that action. When the leadership qualities become superficial and shallow, the demise comes near. Often at the 11th hour, he wakes up and thinks of taking practical action but it gets too late at that point.

Lack of a Long-Lasting Strategy

When we look at the success stories of the top leading entrepreneurs. We will always find one thing common in them. There are always two types of strategies formulated by them.

One is for the immediate future, while the other serves for the far future. This is essential because they know the unpredictability of the business world. Hence, they also realize that the presence of a long-lasting strategy is the only thing that can save them from the dangers of the future.

To a Fabian entrepreneur, the future doesn’t count at all. To him, it’s the present that actually matters. As long as the present is safe and sound to him, things are working at the perfect pace. So, he doesn’t feel the need to come up with a perfect strategy that could tend to the present and make things better in the future.

As I have discussed earlier, a Fabian entrepreneur is always the one who raises questions on the validity of innovation. Even if the time comes to adopt innovation as the ultimate survival strategy, he is the one who is double-minded concerning the efficacy of that innovative strategy.

His doubtfulness hails directly from his fear of moving away from the convention and putting the venture in danger. You all know that danger and red signal are the signs of panic for a Fabian entrepreneur, so he becomes highly suspicious of the efficacy until and unless he comes out of the business storm safe and sound. 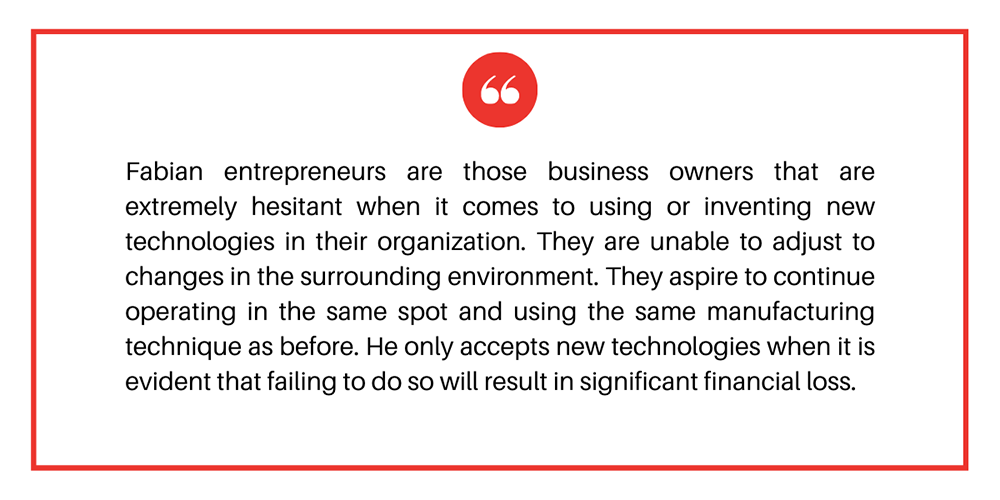 A Fabian entrepreneur lacks the basic spirit of innovation and strategic planning. However, he is also the one who is mostly concerned about the sustenance of the venture.

Probably, this one feature makes him different from other entrepreneurs in that where they are thinking of putting all the stakes at risk for success, he works for sustenance rather than much-needed success.

Many of the Fabian entrepreneurial ventures stay in the middle of the growth graph and they do make enough that makes the entrepreneur satisfied about the overall progress, though for entrepreneurship, these kinds of entrepreneurs are a danger as they don’t understand the basic spirit of it.

What is the best definition of Entrepreneurship?

All The Exciting Details You Need To Know About An Entrepreneur...